Last evening, the CCOP (Castro Patrol) board joined community leaders and volunteers at Magnet to celebrate the organization’s 7th anniversary. Board Chair Greg Carey told the crowd that the organization’s longevity is due to its role in the community as proactive rather than reactive in dealing with public safety.

“Many community patrol groups are created in response to a violent incident and tend to fall apart when issues are resolved,” Carey said. “We have been able to take a proactive stance towards safety with citizens, SFPD and organizations like San Francisco SAFE to maintain a strong presence.” 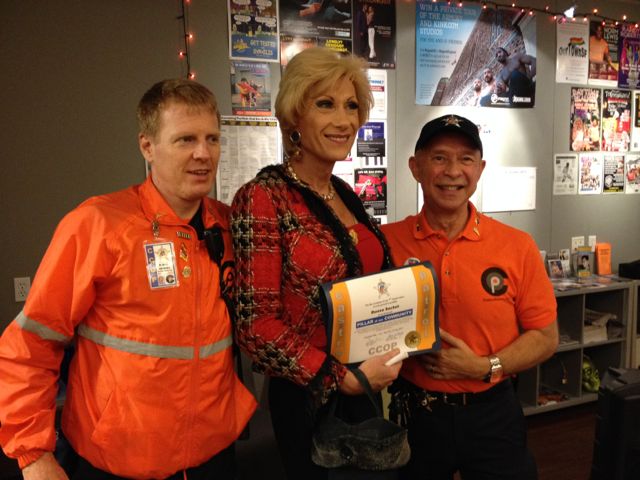 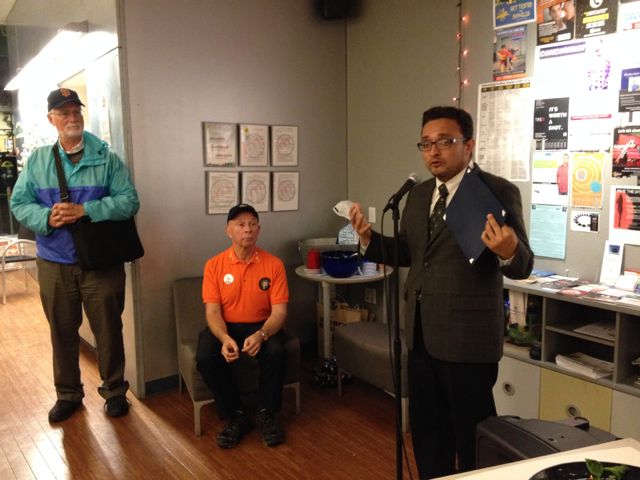 Here are this year’s award recipients:

Sister Eve Volution and Sister Pat n Leather – “Pillar of the Community” award for all of their charitable and education efforts with the Sisters of Perpetual Indulgence and the Stop the Violence campaign. The pink “Stop the Violence” placards in the dozens of store window represent a safe-haven if someone finds themselves the victim of a crime. The additional credibility of The Sisters makes the work more visible and accepted.

Castro Country Club – “Pillar of the Community” award for their tremendous work and importance to the community and their support of CCOP. Castro Country Club graciously allowed Castro Patrol to use their garage as our assembly area for 3 years, which provided a handy spot to start our patrols.

Lieutenant Chuck Limbert, SFPD – “Pillar of the Community” award for his outreach and education efforts while at Mission Police Station. We knew him as “Sergeant Chuck” and could depend on his help in providing a liaison with the police department for dozens of events.

Captain Bob Moser, SFPD – “Community Guardian” award for his outstanding command of Mission Police Station and his unwavering support of CCOP. Captain Moser takes special care to be sure that the Castro is as safe as possible.

Seth Hemmelgarn, B.A.R. – “Community Guardian” award for his tenacious and consistent coverage of the community and his consistent support of CCOP. Seth’s coverage of crimes brings a very special blend of the cold facts with the warmth of personalization to let us know the victims and their families.

San Francisco SAFE (Safety Awareness for Everyone) – “Community Guardian” award for its consistent efforts to improve safety and neighborhoods throughout the city, and the organization’s invaluable support of CCOP. The Castro Partnership with SAFE in the formation of the new Castro Business Watch brings yet one more layer of communications needed to keep the Castro safe and fun.

Ptlr. Phillip Huff, CCOP – “2013 Patroller of the Year” award as the CCOP patroller who has undertaken the most patrols to date this year. Phillip is also our part-time staff person. His patrolling efforts, however, are not a requirement of his work assignment. He volunteered for more than twice as many patrols as the next active member, so he deserves this extra award.

Donna Sachet – “Pillar of the Community” award for all of her charitable and education efforts.

Castro Patrol has its next volunteer training on November 7, 2013 from 7:00 pm to 10:30 pm at Bank of America’s community room on Castro Street. Please sign up as a volunteer here. The organization asks for one 2.5 hour shift per month.