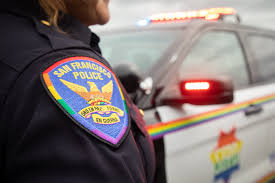 Since our very first tentative steps to address some serious assaults in, and around, the Castro neighborhood in 2006, the San Francisco Police Department was solidly behind Castro Community On Patrol and the entire neighborhood.  Then Chief of Police Heather Fong attended one of our very first volunteer training classes, and each successive Chief of Police since has been fully behind our unpaid volunteer safety patrol, without reservation.  This was essential to the early success of Castro Patrol, and it helped us develop strong and collaborative relationships with many SFPD Command Staff personnel throughout the years, as well as with each Captain who has commanded the Mission and Park Police Stations.  We also developed extremely close collaborations and friendships with many of the individual Officers who called the Castro their beat, whether on foot or in vehicles.

Throughout our more than fifteen year history to date, the SFPD as a whole has been extraordinarily helpful, supportive, and committed to our organizational goals at Castro Patrol, and to the Castro neighborhood and the LGBTQQI+ community from our unique perspective and working relationship with them.  We absolutely recognize that the SFPD as an organization is not perfect, and there remains much work to be done in many areas.  One of the rewards in establishing Castro Patrol is that we found a ready avenue to express concerns, to recommend changes, and to positively impact some policy decisions within the department.  We certainly didn’t always agree with all policing or policy decisions, but we had an avenue to express our opinions and outlook and we know they were considered, if not always adopted.

We feel this is the most productive way to work on enhancing and improving the SFPD, and any official government agency with regard to LGBTQQI+ awareness, rights, and equality.  Working with these entities, holding them accountable and responsible when necessary, but also recognizing and praising them when they get things right.  This open and frank dialogue is essential to allow the opportunity for positive growth and change in our view.  This is what seems to have happened between the SF PRIDE Parade organizers and the First Responder entities who ran into conflict over them wearing their uniforms as they marched in the parade.  The initial SF PRIDE Parade outright ban seemed excessive and harsh, and resulted in considerable backlash from first responder supporters.  Fortunately, the two sides were able to meet and arrive at an amicable understanding to allow any LGBTQQI+ and allied first responders to proudly march in the 2022 San Francisco PRIDE Parade, which Castro Patrol supports wholeheartedly.

There are clearly structural and organizational challenges that SF PRIDE Parade must address in a more comprehensive way around safety at each parade and how to handle civil disturbance and first amendment speech rights at their events.  Some of the initial controversy was generated by protesters in 2020 who blocked the parade for about an hour.  They were eventually removed by SFPD Officers, resulting in claims of heavy handed policing and law suits against the City.  The rights and wrongs of that incident can, and probably will, certainly be debated and discussed for many years to come, as they should be.  The decisions made by SF PRIDE organizers, by SFPD Command personnel, and by individual Officers during that protest should be examined, discussed at length and suitable lessons understood to help inform future parades, and to assist in addressing future possible protests and disruptions of the parade.

LGBTQQI+ members of our entire first responder community have faced bitter opposition, outright hatred and bigotry, being overlooked for promotion, being assigned to unwelcome tasks or duties, and much more in their decades long struggle within many governmental agencies and entities.  The SFPD and SFFD have had, and sadly continue to have, many instances of such treatment and prejudice.  It is those very LGBTQQI+ individuals who are open and out within these entities who are helping to make significant changes and progress for the community as a whole. It is far from easy, far from a comfortable thing to do, and it often comes at a huge personal and professional cost, but their perseverance and bravery has resulted in astonishing cultural and organizational changes for the better.  We owe every LGBTQQI+ first responder a huge debt of gratitude for this, and their out, open, and proud participation in the SF PRIDE Parade is one moment in time each year when we can offer that support and encouragement as a broader and more diverse community of San Franciscans.

We applaud the decision of the SF PRIDE Parade and the LGBTQQI+ first responders and look forward to cheering them on, as they march out, open, and proudly in this years parade. 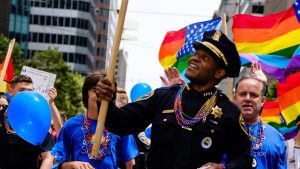